Take a gastronomic tour of Vietnam, but be warned – do not read this article if you are even slightly hungry. 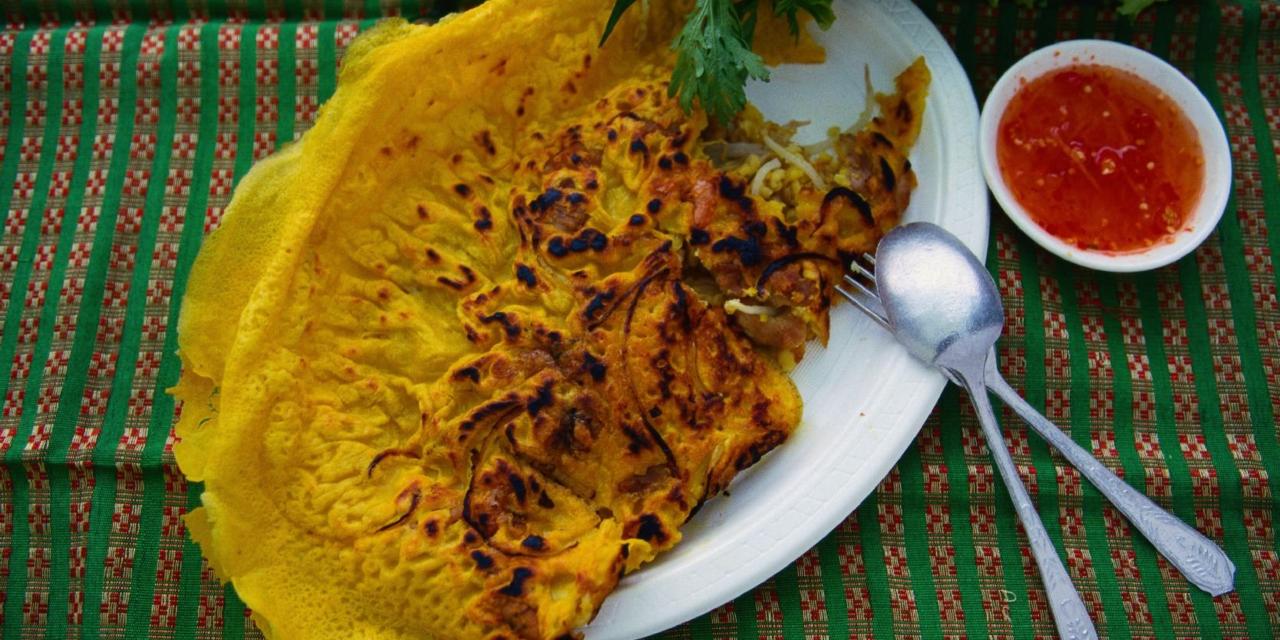 1. Pho
They call it beef noodle soup, and such it is, but it is also so much more. It is Vietnam in a bowl. Pronounced like “fur” without the “r”, it is beef noodle soup raised to the nth degree. You can have pho everywhere in Vietnam, but it is almost a cult in Hanoi. Try it Pho Gia Truyen in Hanoi’s Old Quarter for a taste of the really good stuff.

From the garnish tray, add a squeeze of lime juice. Nibble at the bean sprouts to test their crispness. If they pass the test, add a few to the soup. And a dash of chilli sauce and garlic sauce or fish sauce. Lastly, sprinkle it with coriander leaves, mint leaves, or basil. Or all of them. With your chopsticks, thrust deeply to the bottom of the bowl. Lift the noodles above the surface and let the dressings you have added subsume into the body of the work. Lay the noodles back to rest. In the next minute the flavours will marry.

The more traditional beef variety of pho is called pho bo, while the chicken is pho ga.
2. Mon cuon (Rice rolls)
Rice rolls are produced everywhere in Vietnam, with the most well-known being goi cuon (known elsewhere as Vietnamese rice paper or summer rolls). But those that are made in Hanoi have their special characteristics. The wrappings of banh cuon are as thin as a sheet of paper, appearing as edible alabaster, soft yet offering something to the teeth. Ingredients may include grilled pork, fried bean curd or vegetables, which are served on top. If you are really lucky, they will add a drop of coleopterous essence (a highly aromatic secretion from the gland of a type of beetle).
Do not miss Hanoi’s Banh Cuon Gia Truyen (located in the Old Quarter) for delicate and incredibly tasty banh cuon.
Northern specialties
The basic tenets of the north’s cookery are more closely aligned with China than that of other local regions. Fewer spices are available than in the south, but the people could not do without black pepper. They use a superior grade that is mild, yet intensely aromatic, and with a sweetness that is unique to this land. Equally important are the sweet and pungent herbs – basil, mint, coriander, spring onions and several other tasty leaves.
3. Bun cha
Bun cha is simply grilled pork served on a bed on of cold rice noodles and dressed with a few herbs. The meat is always cut from a piece of well-marbled pork and must be grilled with a pair of fresh bamboo tongs. It is marinated in a mixture of sweet, hot, sour and salty, and the resulting product tastes like none of its constituent flavours, yet more than the sum of its parts. But, like so much of the north, what gives the bun cha its characteristic taste and smell are the minty herbs, most often from nearby Lang village.
Pay a visit to Hanoi’s Bun Cha – they do the one dish, and they do it extremely well.
4. Snail dishes
In Hanoi there is a type of snail living in ponds and lakes that grows to the size of a golfball, has a streaked colour, and, while chewy, is very tasty. They are called “oc”. Bun oc are boiled snails dipped in nuoc cham, placed in a bowl of rice vermicelli and snail consommé poured over. You can also get bun oc in many seafood restaurants. Oc ngoi are minced snails mixed with onion, garlic and mushroom; rolled in ginger leaves and stuffed in the shell of the snail, then stewed. Pull the ginger leaf out and the rest comes along. Oc hap bia are snails are steamed in beer. Try also oc xao ca vo (shelled stir-fried snails), oc cuon cha (rolled snail) and bun oc kho (dried noodle and snails).
5. Lau (Hot pot)
The lau (hot pot) comes from China. It is a turban-shaped pan containing stock, in the middle of which is a charcoal stove (now alcohol fuel is used). The stock is kept simmering throughout the meal. The lau is placed in the middle of the table, around which is a variety of foods, including rice vermicelli, pig’s heart, liver and kidneys, goat meat, eel, onion and vegetables. The less adventurous might opt for shellfish, river fish or chicken. Put as much food as you would like to eat into the pot, give it a stir, and in about five minutes you are ready for dinner. Keep replenishing the pot as you go. It is rather like fondue, and it is just as convivial and fun. Depending on the ingredients used, it might be called lau de (goat meat), lau luon (eel meat) or lau thap cam (with many different kinds of meat).
6. Bánh xèo
Of Hue origin is bánh xèo, akin to a paper-thin crepe filled with goodies then folded. The Vietnamese make it with eggs, rice flour and coconut milk, and fill it with meat and shellfish, as well as vegetables. The finished product is wrapped either in rice paper with herbs or salad leaves. Bánh xèo is often referred to in English as a Vietnamese “pancake”. We think this is an unsatisfactory translation, but there seems to be nothing we can do about it.

Locals will always hit the restaurants that specialise in a single dish, and the renowned spot of Banh Xeo 46a has some of Ho Chi Minh City’s best bánh xèo. Or try Ban Xeo Muoi Xiem part of an emerging bánh xèo chain, which offers more than 35 varieties.
Correction: A previous version of this article incorrectly stated Oc hap bia are snails were stewed (not steamed) in beer. The use of coconut milk and sugar cane were incorrectly described as speciality dishes of Vietnam’s south. This has been fixed.

The article ‘Vietnamese food for beginners’ was published in partnership with Lonely Planet.