Hundreds of artists from 16 art troupes gathered at the second Van singing festival which opened in the northern province of Bac Giang on October 25. 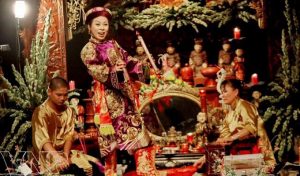 The event, which lasts until October 27, is part of the activities to carry out the project to preserve Bac Giang’s cultural heritage during 2011-2020. The move will help local people have deeper understanding about Van or Chau Van (spiritual singing) and Mother Goddesses worshipping which were recognised by the UNESCO as Intangible Cultural Heritage of Humanity.

Director of the provincial Department of Culture, Sports and Tourism Tran Minh Ha said that the festival offers opportunities for local artists to meet and learn experience from those in neighbouring localities in preserving and promoting values of Chau Van singing.

Chau van was created during the Tran Dynasty (1225-1400) and Nam Dinh Province is considered as its birthplace.

The highly rhymic and trance-oriented form of singing often takes place during rituals to honour the Mother Goddesses and connect to other gods. It is performed mostly at temples and pagodas.

The music and poetry performed in the folk art are mingled with a variety of rhythms, pauses, tempos, stresses and pitches. The genre has also adopted folk songs from the highlands of the north, centre and south.