Travel season starts off with a bust in Vietnam 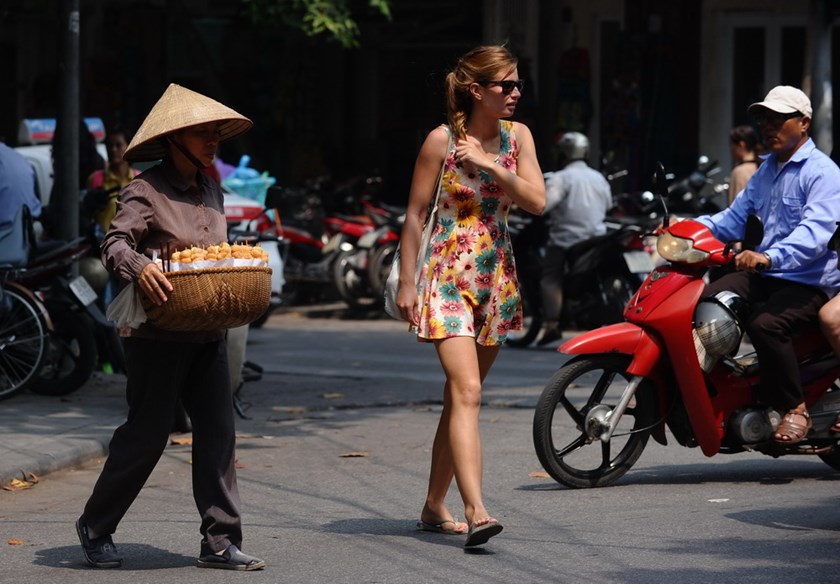 A street vendor and a foreign tourist cross a street in Hanoi’s old quarter on October 9, 2014. Vendors parading the streets with colors attracts many foreigners in Vietnam, but their determination to sell also annoys the latter. Photo: Hoang Dinh Nam/AFP

Foreign arrivals to Vietnam fell significantly across nationalities this year, while the hottest destinations failed to pull many of them back according to recent polling results.
A statement from the Vietnam National Administration of Tourism showed a 11.1 percent annual drop in tourist arrivals, and 3.3 percent monthly decline compared to last September.
October usually marks the beginning of tourist season, but only more than 559,000 arrivals have been reported this month.
Finnish visitors represented the most significant drop–as their arrivals plunged 59 percent from last October.
The 32 percent drop in Russian arrivals was considered most alarming given the heretofore stable growth in that segment.
Arrivals fell across almost all nationalities, except for slight increases from Cambodia and South Korea.
Thai arrivals fell by 28 percent; Taiwanese by 21, Chinese by 19 and Swedes by 15, according to the administration’s survey.
Another survey compiled by the Environmentally and Socially Responsible Tourism Capacity Development Program funded by the European Union found few tourists returning to Vietnam.
The survey conducted on 3,000 visitors to the country’s five top destinations Sapa, Halong Bay, Hue, Da Nang and Hoi An found only 6 percent of foreigners were returning.
Respondents from both overseas and Vietnam said they would recommend the destinations to others, but the foreigners were not as enthusiastic as locals, it found.
Many Vietnamese and foreigners also prefer to travel to Vietnam by themselves instead of booking with an agent.
Representatives from several travel agencies and hotels familiar with foreign customers described a “difficult” situation.
High vacancies now plague several hotels in Ho Chi Minh City while cruise operators in Halong Bay complained of similarly poor turnout.

Share "Travel season starts off with a bust in Vietnam" via: