The ASEAN Community, scheduled to establish in 2015, is expected to greatly benefit tourism sector as the Mutual Recognition Arrangement on Tourism Professionals (MRA-TP) among ASEAN members will take effect in all member countries. 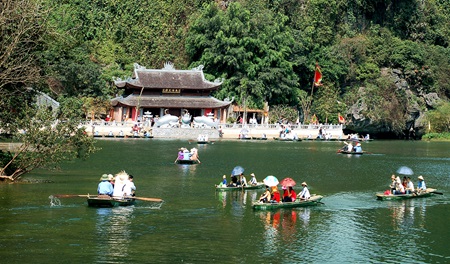 Currently, ASEAN has built common standards for six tourism areas, including reception, restaurant service and tour operation, with a total 32 work titles, except for tour guide.
Experts held that Vietnam can apply the standards to save cost in building its own. Vietnamese tourism companies can refer to the standards to improve their service quality and competitiveness. Furthermore, they can recruit qualified workers from other ASEAN countries.
On the part of domestic tourism workers, they have the chance to find better jobs and can easily move to other ASEAN countries.
However, challenges will also come, and the sector will not be able to maximize the opportunities if it fails to enhance its competitiveness.
With the free movement of tourism professionals among ASEAN countries, Vietnamese tourism workers will face fierce competition from their regional rivals who are predicted to flock to Vietnam. Meanwhile, the sector also faces a high risk of brain drain when qualified staff go elsewhere for better working conditions and payment.
In that context, improvement of human resources quality is becoming urgent for Vietnam’s tourism, which is considered key for the growth of the sector as well as a perquisite condition for its international integration.
According to the Vietnam National Administration of Tourism (VNAT), around 1.8 million employees are working in Vietnam’s tourism sector, a surge from only 12,000 in 1990. Each year, the sector needs nearly 40,000 new workers, but domestic training establishments graduate only 15,000, resulting in a serious shortage of qualified staff.
In Ho Chi Minh City, as many as 45 percent of local tour guides and operators, and 80 percent of receptionists lack adequate foreign language skills, according to the municipal Department of Tourism.
So far, a number of response efforts have been carried out, including the issuance of a revised set of tourism occupational standards (VTOS) to suit international standards. The new VTOS was built by the EU-funded environmentally and socially responsible tourism capacity enhancement programme.
According to statistics from VNAT, ASEAN countries welcomed 97.2 million foreign visitors in 2014, up 3 percent over the previous year, including 28.5 million who travelled inside the bloc.
VNA/VietnamNet.

Share "Tourism sector expects to benefit from ASEAN Community" via: