The northern mountainous province of Phu Tho aims to mobilise resources for conserving and promoting the Hung Kings’ worship-related culture, documents and facilities, according to Provincial People’s Committee Vice Chairman Ha Ke San. 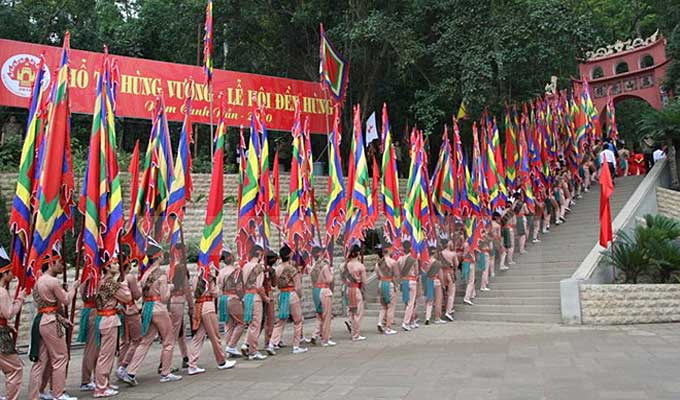 The province has invested in building and upgrading numerous worship sites, and recovering traditional rituals and festivals related to the Hung Kings.

Over 700 billion VND (31.25 million USD) has been spent on the building and maintenance of the facilities in the Hung Kings Temple Relic Site.

The locality aims to mobilise 4.5 trillion VND (200.9 million USD) by 2030 for the work, with the hope to make the relic site one of the key special national relic sites and promote spiritual tourism.

The maintenance of the Hung King worship sites has been implemented at all levels across the province, particularly in the communes and villages near the Hung Kings Temple Relic Site.

Between 2013 and 2014, over 8 billion VND (357,142 USD) from the local budget was allocated for upgrades to 15 relic sites related to Hung King worship rituals across the province.

More investment has been put in the maintenance of the worship sites of other figures related to the Hung Kings, such as their wives and generals.

The province has developed a national action plan for protecting and upholding the sustainable values of the local Hung King worship rituals.

The efforts include enhancing the awareness of cultural values among the community – particularly among children by including heritage training programmes at schools.

Additionally, studies and collection of Hung Kings-related documents and rituals will be strengthened, while hands-on training courses on the practices are planned.

Spiritual tourism will also be expanded.

According to Ta Thi Kim Dung, Deputy Director of the Hung Kings Temple Relic Site Management Board, a database on Hung King workship rituals has been developed and updated regularly.

Exhibitions of the rituals have been held annually at the Hung Kings Museum in the province, Dung said.

The provincial Department of Culture, Sports and Tourism has also worked with the Institute of Hán-Nôm Studies on collection and translation of hundreds of documents related to the Hung Kings in the relic sites across 10 northern provinces and cities.

Traditional rituals, processions, sport and folk games have been widely organised at Hung Kings worship sites during the Hung Kings Festival across the province.

Hung Kings are the ancient Vietnamese rulers of Van Lang Kingdom in the Hong Bang period (2879–258 BC).

According to Vietnamese legend, the 18 Hung Kings ruled during the first period of Vietnamese history, from 2879-258 BC.

The Hung Kings Festival is held annually from the eighth to the eleventh days of the third lunar month.

The worshipping ritual of the Hung Kings is closely related to the ancestor worshipping traditions in most Vietnamese families, which forms an important part of people’s spiritual lives. It was recognised by UNESCO as part of the World Intangible Cultural Heritage of Humanity in 2012.