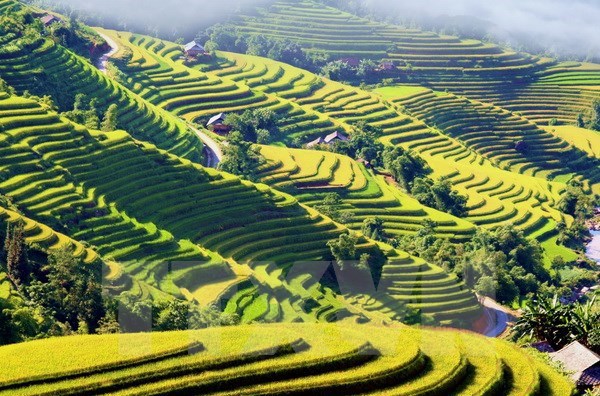 Rice terraces in Hoang Su Phi District in the northern highlands’ Ha Giang Province. Photo by VietnamPlus
Ha Long Bay and northern rice terraces are among the spotlights.
German public broadcaster ARD is finishing a special program to introduce the beauty of Vietnam through its nature, culture and people.

Philipp Abresch, Southeast Asian bureau chief of the broadcaster in Singapore, said a team has been traveling across Vietnam to capture the best of its landscape and culture, especially of the minority groups.

The team visited some of the country’s most popular destinations including Hanoi, Ha Long Bay and the ancient town Hoi An, all of which are highly-recommended destinations in Southeast Asia.

Last year, the popular U.K. news website Telegraph last year named rice terraces in Vietnam’s northern highlands among the most “surreal” landscapes on earth while travel magazine Condé Nast Traveler put the site together with Ha Long Bay in a list of 50 most beautiful places in the world.

Lena Bauer, a production team member, said Hoang Su Phi had the most beautiful rice terraces she has ever seen.

A total of 125,620 Germans visited Vietnam in the first nine months this year, up 19 percent from a year ago. German visitors can now visit the country for up to 15 days without a visa.

ARD’s documentary “Long Thanh Wants to Smile” about Vietnamese dioxin victims was nominated for this year Emmy Awards in the Current Affairs and News category. It did not win the award.