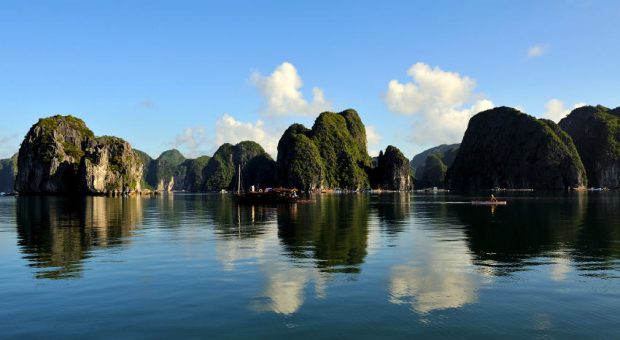 Bái Tử Long National Park (Vietnamese: Vườn quốc gia Bái Tử Long) is a protected area zone in north-eastern Vietnam. It was established in 2001, succeeding from the former Ba Mun National Conservation Zone. It is one of seven Vietnamese amphibian national parks which has both terrestrial zone and aquatic zone.

It is located within Bái Tử Long Bay, which with Hạ Long Bay forms an impressive scenery of sea and islands. Including thousands of islands and rocks, they create one of the most beautiful bays in the world.

According to legend, an immense dragon descended to Hạ Long Bay (meaning ‘’Descending Dragon’’) millions years ago, dropping numerous eggs. These eggs hatched forming thousands of rocks and islands. The tail of the dragon extended far to the sea, forming Bạch Long Vĩ island (meaning “The Tail of the White Dragon”). As she returned to heaven, she said good bye to her offspring at the Bái Tử Long Bay (means “The dragon parts the offspring”).

It is composed from a terrestrial area of 61.25 km2 and an aquatic area of 96.58 km2. The zone includes over 40 islands and rocks. They form three groups : Ba Mùn group, Trà Ngọ group and Sậu group. The aquatic area includes the sea zone between the islands and the narrows between the park area and the land area which has boundary of 1 km offshore. The National Park also includes a buffer zone of approximately 165.34 km2, which is located in a larger area including 5 communes : Minh Châu, Vạn Yên, Bản Sen, Quan Lạn and Hạ Long. The total population of the core zone and the buffer zone is around 24.000.

The Limestone Forest area is forest growing in poor soil with particles of limestone on rocky islands. Some rare animals found there include Serow, Rhesus macaque.

The Littoral Ecosystem in the park is small areas surrounding the islands. It has a rather large tidal variation and is biologically highly diverse with 251 species including 19 species of mangrove, 17 species of seaweed, 29 species of marine worms, 149 species of molluscs, 22 species of crustaceans and 15 species of echinoderms.

The Coral area is located from the water depths of low tide to 10m deep. 409 species have been found including groupers, sea bass, crabs, snails, abalone and seaweeds.

The shallow water area covers a large area around the islands, beyond the tidal area and extending from 1 km to around 4 km. These areas have not been profoundly researched but 539 species have been found.